Apr
04
2017
Druckversion
Let’s block the spectacle of the powerful with the bold and rebellious spirit of the many.
BlockG20 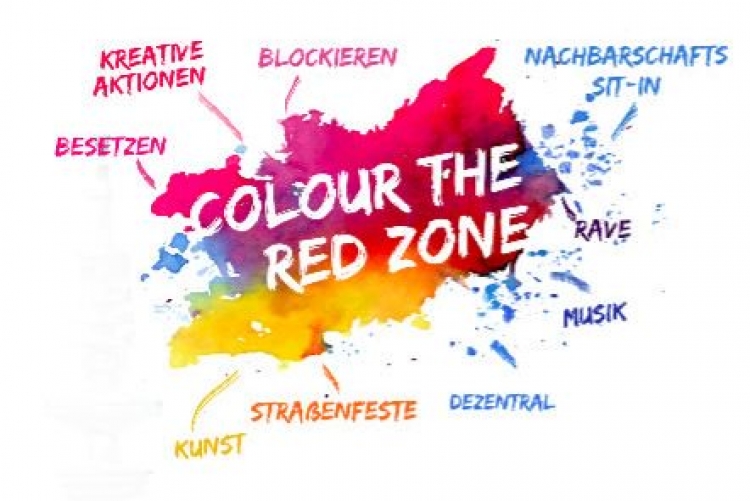 We will be there. Where the red zone is. Where we are not supposed to be. Where the powerful are. The G20 Summit in Hamburg will make history. It will be our time. Will it also be yours?

The G20 is a summit of despots, of rulers and their accountants. They have long decided to impose the state of emergency on us. We decide to abolish their order. The G20 Summit will occupy the city. On July 7th and 8th 2017 the heads of state and government of the 19 richest and most powerful states of the world will convene in Hamburg. The EU will also be there. They want to discuss their crises: the future of global capitalism. Trump against Merkel? Alongside them Erdogan, Xi Jinping, Modi, Temer, of course Putin and all the others – it is all about a new deal. Who gets what, how can they profit and most importantly: How can the losers, that pay for this monstrous inequality, be prevented from knocking on our doors?

Those are not our concerns, that is not our Big Deal. It is the global injustice that is the root of all evil in this world. Starvation, poverty, the climate catastrophe, the destruction of the environment, wars, displacement. It is their chaos and that is what they want to negotiate in Hamburg. We are told that the free West has to stand together as one to combat the terror of the islamic caliphate. But we will not be deceived any longer. We as free and equal people are the unforgiving enemies of all fundamentalisms. It is not possible to justify any terror to us or in our name. By rejecting the terror of fundamentalist jihadists we also call into question the market fundamentalism of capitalism.

The G20 will hold a city hostage. The people in Hamburg are constantly talking about how their neighborhoods will be transformed into a high-security zone. Many will then not be able to get home. They will be watched by snipers on their way to the bakery. The participants of the summit will be locking themselves in because they have stopped to trust their electorate a long time ago. The “free world” will be meeting surrounded by NATO barbed wire, concrete blocks and an armada of police, military and so called security forces. Well, thank you! Just because of that it is already clear for us and many others: G20 – not welcome!

What we are doing is justified!
Some of us take action in self-defense, to save our world, others with the great spirit of freedom, and still others simply because of their desire to revolt. Thus they should not try to stop us with road traffic regulations. Those who want to build walls, who are incarcerating half a country, who are burning cities to ashes, who let thousands drown in the Mediterranean, should not lecture us on reason, law and order. It is just empty talk. It is all fake news. These G20 do not represent us! They do not have the solutions to our world’s real problems. Their economic system is utter madness: without any respect for the future, the nature and for the right of all people to live a dignified life in freedom. Should we watch how they destroy our world?

They tell us: “The G20 represent two thirds of the world’s population.” This would legitimize them. No! They stand for 80 percent of global CO2 emissions. For wars, for massive displacement, for injustice that drives so many people to despair. They only negotiate which of the scenarios of absurdity will be pushed through: uncompromising neoliberal free trade or authoritarian oligarchic capitalism, both together or simply an open dictatorship? Not in our name: We make the only solid choice in these times of unrest: global friendship without borders, a rebellion of equals!

We rely on the rebellious mind and the reason of the heart. We announce: We will transgress the rules and block the red zone. Not everything we will do will be in conformity with the law, but will be open and visible for all those who are going to participate. Of course, there will be a risk. Rebellious disobedience is not a stroll in the park. If the police is going to act unpredictably and brutally, we will not be scared and others should also not be. Because we will be thousands and will stick together. We act in the tradition of Block G8 in Heiligendamm, Dresden Nazifrei, Castor schottern, Ende Gelände or Blockupy. Events in which the confidence, power and hope of the many has always become noticeable. We will enter an agreement on what we are going to do at different spots to enable the participation of everyone. This is our policy of friendship during the days of the large gathering.

The entire city of Hamburg will be a celebration of hope
We will be in the streets in the heart of Hamburg with tens of thousands, running, dancing, sitting, moving. We will move through the city in multiple groups such as fingers, unexpectedly, daringly and in solidarity. We will surge to the sites of the summit from all directions, to the trade fair, to the city hall and the Elbphilharmonie. In short: to the so called red zone of the powerful. When the police will try to stop us, we will find alternative paths to our goal. Where necessary, we will overcome obstacles and break through police chains. We will protect ourselves so that we will not be hit, so that teargas will not burn our eyes and make breathing impossible. We seek political confrontation but not physical attacks. We will be many and that is what will protect us. We will go as far as our courage will take us. We will stay overnight if necessary. And we will be loud. With all those who are there and on behalf of all those who cannot be there with us.

We will not be the only ones on the streets with our mass action. We are looking forward to this day and we are in solidarity with all those who share our critique of the G20 and who will help shape that day: street parties, assemblies, club nights, congested roads, blockades, actions everywhere and movement from here to there. We will be talking with each other and will always be approachable and approach others. We invite everyone to get in touch with us and to participate.

Mutual learning and diverse actions!
Our lifestyles, our passions and our hopes may be different. But we all despise the fixation on blood, gender and race, on nations and the holy money. We are union members, apprentices, pensioners, students, employed or unemployed, with good positions or shitty jobs. We are young and old, we are someway in between. We have children or not. We unconditionally love freedom and the right to love whomever we want. We are part of movements and sometimes also party members, we are climate hippies and passionate defenders of world peace, we are squatters and poltical idlers, we respect all gods and yet none, we come from somewhere else or have always been here. We support refugees. We advocate the friendship of equals in all our diversity, we fight for a solidarity of the free in a coming real democracy. We say: Block the G20 Summit and colour the red zone! 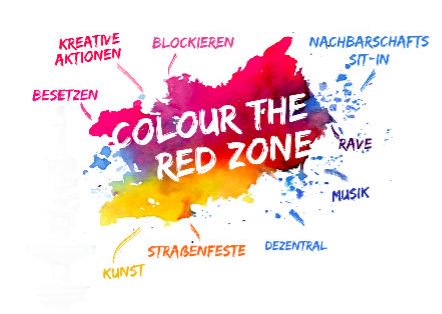