Solidarity without borders instead of G20!

Feb
17
2017
Druckversion
Coalition Call to Action for the Major demonstration against the G20 summit on Saturday, July 8 in Hamburg! 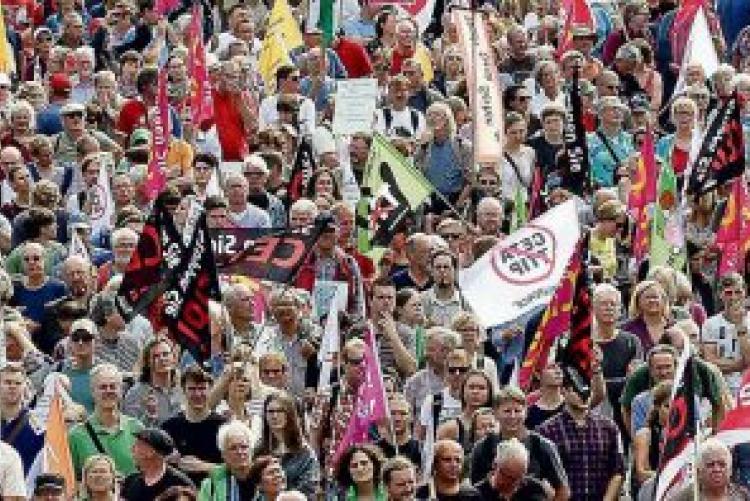 Something is going very wrong in the world:

On July 7 and 8, those politically responsible for this humanitarian and social disaster want to meet in Hamburg. At their annual summit, the heads of the G20 countries talk about “fighting the causes for migration”, but none of the big countries of origin sits at the table. They talk about “a partnership with Africa”, but almost the whole continent is kissing. They talk about climate change, but represent the interests of the oil, coal and car industry. They talk about peace, but they themselves are the biggest belligerent and weapons producing countries.

In the midst of these illustrious guests, Merkel and the federal government want to present themselves as a haven of reason and balancing. At the same time, they shut down the bor-ders of Fortress Europe, dictate a neoliberal policy of impoverishment to Greece and other countries and are involved in illegitimate regime changes all over the world. Germany’s role in the worldwide battles for resource allocation and markets is to be extended. That’s also what the increasing number of foreign deployments of the Bundeswehr is for. The German government even makes deals with dictators like Erdogan, therefore supporting his war against the Kurdish people, in order to pursue its own interests in the region and have Tur-key block the way to Europe for refugees.

The G20 summit will paralyze Hamburg for days and misuse the city as a backdrop for a staged show, as the people living there are to be marginalized. But this plan won’t work out. May the state visitors and their delegates barricade themselves in the exhibition halls. The streets will belong to the people who aren’t hosting the summit. Our criticism isn’t just against individual persons and representatives, but against the circumstances and structures that produce them. We will clearly express our rejection of this cold and cruel world of global capitalism, as it’s represented and organized by the G20. We will express our solidar-ity with all those who oppose the politics of the G20 through protests, strikes or uprisings worldwide. Our demand for a world of peace, global justice and borderless solidarity will be unmistakable.

We invite everyone who shares our outrage and our hope to take to the streets of Ham-burg with us in a loud, colorful and diverse demonstration on July 8, 2017.

Major demonstration against the G20 summit on Saturday, July 8 in Hamburg!